Churchill and the Crown

Visit Chartwell in the new year for a brand new outdoor photography exhibition, exploring the special relationship between Sir Winston Churchill and the monarchs he served. 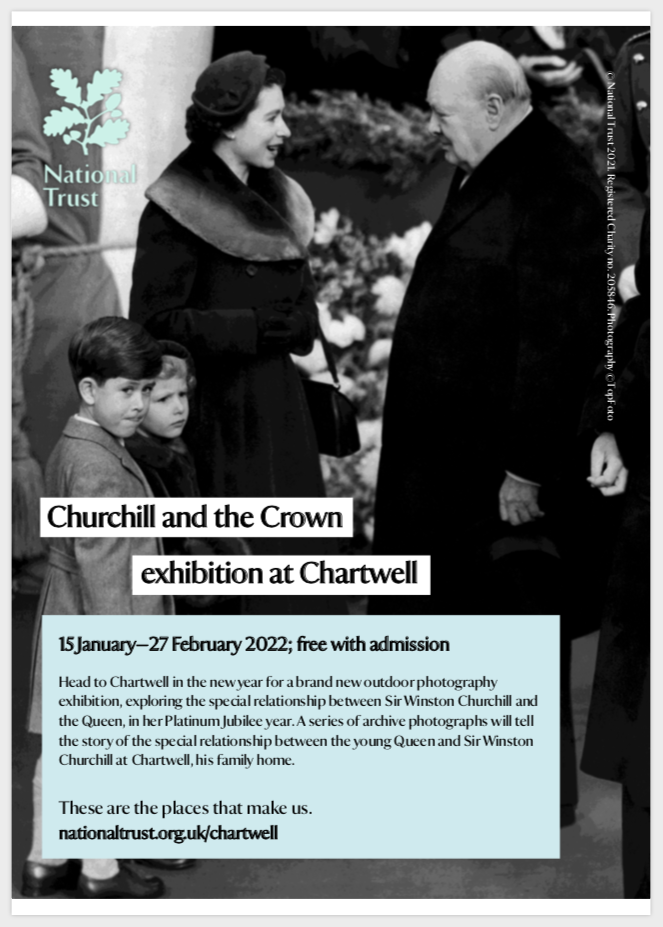 In her Platinum Jubilee year, a series of hand-selected archive photographs will tell the story of the special relationship between The Queen and Sir Winston Churchill, at his family home.

In 2022 Her Majesty The Queen will become the first British Monarch to celebrate a Platinum Jubilee, having acceded to the throne in 1952 during Churchill’s second term as Prime Minister. The two had a close and genuine relationship, having first met when The Queen was just two years old.

Churchill became The Queen’s trusted advisor through the earliest years of her reign, and she meant a great deal to him. This enduring relationship is illustrated by the photograph of her on her Coronation Day, which Churchill hung on the wall of his study at Chartwell.

“The relationship between Her Majesty The Queen and her first Prime Minister was a longstanding one. From Churchill’s warm friendship with her parents, King George VI and Queen Elizabeth, through to Queen Elizabeth II’s coronation and the earliest years of her reign, these archive photographs encapsulate a truly remarkable friendship that changed the course of history.“

In a speech broadcast ahead of her coronation, Churchill referred to The Queen as ‘a Lady whom we respect because she is our Queen and whom we love because she is herself’, showing just how fond he was of her.

Years later, when asked which Prime Minister she enjoyed meeting with the most, The Queen replied, “Winston of course, because it was always such fun.” One of her household staff even remarked, “I could not hear what they talked about, but it was, more often than not, punctuated with peals of laughter, and Winston generally came out wiping his eyes.”

Working with TopFoto, the reproduced photographs will be enlarged and displayed on the Terrace Lawn, situated just outside the house and overlooking the beautiful winter gardens and estate. Together, the images will bring to life a genuine warmth and friendship which extended beyond that of monarch and advisor.