Today is #WindrushDay. I am writing this on the seventy-eighth anniversary of the arrival of The Empire Windrush to Tilbury Docks. It’s a poignant moment in British history to reflect upon and to be writing about. This historical moment has been the imaginative touchstone during my residency: photos of this moment inspiring research, imagery and stories; conjuring poems translated into monologues and lyrics.

There are places the imagination leads which you can never anticipate from the outset of a creative journey, but for which you are forever grateful: never was this truer (in all of my creative journeys) than in this residency. I didn’t think this creative journey would involve uniting a family with an image that they hadn’t seen before of their relatives.

Emotionally drawn to a small selection of images at the initial stages of my residency, I let that gut instinct be my guide. This was one of the images I was immediately drawn to:

A striking image of a mixed-heritage family: a white mother, a light-skinned Black father and their mixed-heritage son and daughter, on board the Empire Windrush on the 23rd June 1948. This is an image which disrupts common place narratives of the Empire Windrush; namely that the only people travelling were men. What the picture evidences is something of the racial and cultural diversity of those onboard; that the ship carried children, women, partners and families. It’s also an image that felt from the start that it had something to tell me (as did the people in it); an image taken twenty-five years before my own parents met – their own mixed-relationship meaning that they faced routine societal pressures and hostility.

I immediately wanted to know more about the people in this particular picture: where were they headed; how was life for them and their children after this journey; what became of them?

The search engine is a fascinating resource, making connection across time and place possible. First, I search the name I can see mentioned in the archival notes accompanying the photograph: Mrs Doreen Zayne. This leads me to a Guardian article printed the day The Windrush arrived at Tilbury Docks: https://www.theguardian.com/uk-news/2016/jun/23/immigration-windrush-west-indians-jamaica-britain The article references Doreen Zayne: “Mrs. Doreen Zayne, formerly, and soon to be once more, of Blackpool, confessed that she did not care for Jamaica and was glad to be home again. She has two children, a boy and a girl. Her husband hopes to find work in Lancashire.”

I search the surname Zayne along with the word Windrush and the first article in the list is a 2018 article written by journalist Maya Oppenheim. Maya’s article references her great uncle and his family’s passage on the Empire Windrush, in a context of a feature about a new book about the Windrush: Mother Country: Real Stories of the Windrush Children (Brinkhurst-cuff, 2018). The book features a chapter entitled Strange Lands written by the scholar and researcher, Naomi Oppenheim – Maya’s sister. I notice the image imbedded in the article (a news clipping from an historical Jamaican newspaper), is a similar image to the one I am drawn to in the TopFoto archive. Flora suggests that because the image in Maya’s article is a clipping, perhaps the family don’t have, or indeed know the whereabouts of, the original image of their family members.

I decide to contact Maya to let her know about – and send a link to – the original image. I am completely blown away by Maya’s response: 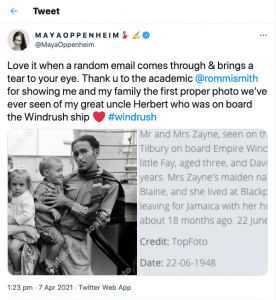 Over the next three months, I make contact with Maya, Naomi and Dawn – Herbert and Doreen’s youngest daughter. Those conversations and communications were vital in helping me with writing a tryptic poem-monologue in the imagined voice of Herbert. The piece takes the form of a three moments in time and three short letters I imagine Herbert writing, the first of them as the Windrush set sail. The monologue, entitled The Empire Windrush: Mr Herbert Zayne is Writing a Letter Home, is performed by the actor Lladel Bryant:

It was such a joy to work with Lladel – and musician and composer, Christella (Stella) Litras. A week ago, we went into Stella’s recording studio for a socially-distanced recording of this piece (and others) from the seven new works I’ve written for this residency. All seven pieces will be launched online next week.

My gratitude and thanks to the members of Herbert and Doreen’s family whom I’ve met, directly and indirectly, for their time in sharing their experiences and perspectives.